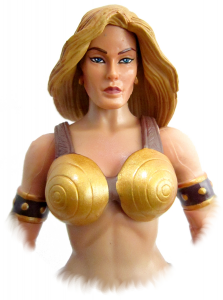 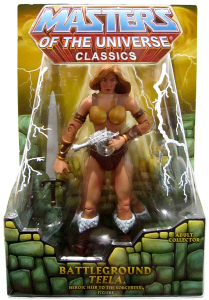 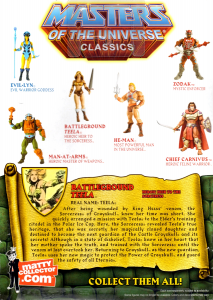 After being wounded by King Hssss venom, the Sorceress® of Grayskull' knew her time was short. She quickly arranged a mission with Teela® to the Elders training citadel in the Polar Ice Cap. Here, the Sorceress® revealed Teelas true heritage, that she was secretly her magically cloned daughter and destined to become the next guardian of the Castle Grayskull® and its secrets! Although in a state of disbelief, Teela® knew in her heart that her mother spoke the truth, and trained with the Sorceress® until the venom at last overtook her. Returning to Grayskull' as the new guardian, Teela® uses her new magic to protect the Power of Grayskull' and guard the safety of all Eternia®.???????